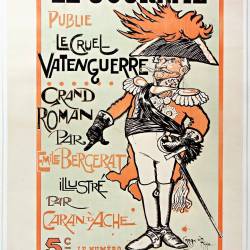 Caran d'Ache, whose real name was Emmanuel Poiré, was born on November 6, 1858 in Moscow. From his majority, he immigrated to Paris and enlisted in the army to obtain French nationality. From 1886, he published his cartoons in various magazines and newspapers such as Le Chat noir, le Tout Paris, La Caricature or le Journal. In 1898, he became the co-founder, editor and cartoonist of the newspaper Psst...! , a satirical and anti-dreyfusard weekly. Along with other artists, Caran d'Arche was also a member of the Anti-Dreyfusard League of the French Homeland. Caran d'Arche died on February 25, 1909 in Paris.