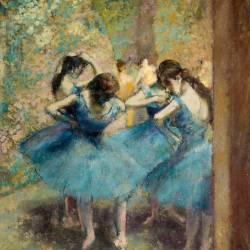 Edgar Degas is an influential French painter, printmaker and sculptor of the 19th century. Born in 1834 in Paris among a wealthy Parisian family, Degas quickly chose to become a painter.
In his early career, he worked alongside different masters including Félix Barrias and Louis Lamothe when pursuing an academic training. Significant encounters (for instance the French artist Gustave Moreau) and travels in Italia where he studied classic models “in situ”, completed to form his identity as a painter.
His artworks after his trip mainly revolved around the popular Parisian way of life of his time in reference to the neighbourhood he lived in at the bottom of the Butte Montmartre in Paris. This particular theme made up of scenes from modern life also inspired various artists at that time who focused their attention on painting cafés at night, horse races, cabarets etc.
He also dedicated a great part of his work to one of his passions, dance. Indeed, Degas is often designated as “the painter of the dancer”.
As a memorable figure of his century, Degas also took part in the impressionism movement as a member of the expressionist exhibition.
Edgar Degas died in 1917 and left as a heritage a great collection of painting and drawings from the 19th century that he collected throughout is life as well as a great production of his own.

Dancer in Front of a Window (Dancer...
Edgar Degas

In Front of the Mirror
Edgar Degas

After the Bath
Edgar Degas

See all
artworks from
Edgar DegasDiscover