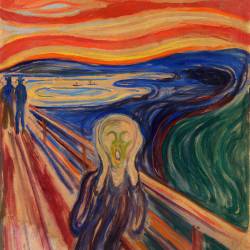 Edward Munch was born on December 12, 1863 in Adalsbruk, Norway. Father of modern expressionism, Edvard Munch practised painting and tempera (a technique based on emulsion) on cardboard. He was marked by familied tragedies (his mother and siblings died of illness) which reflects in his paintings. The latter, depict a certain sadness and death and illness are recurrent themes. Success came with "The Scream", which caused a scandal. Munch continued to paint until the end of his life, but suffered under the Nazi regime, which classified his works as "degenerate" and burned over 80 of them. By drifting away from the cold use of colour of the Impressionism painters, Edvard Munch, like Gauguin and Van Gogh, became one of the first post-Impressionists. Edward Munch died on January 23, 1944 in Oslo.

Dance on the beach
Edvard Munch

The Garden in Asgardstrand
Edvard Munch

Girls on a Bridge
Edvard Munch

Clothes On A Line In Asgardstrand
Edvard Munch

Girls on the Bridge
Edvard Munch

Party on the Karl Johan Avenue to...
Edvard Munch

At the Roulette Table in Monte Carlo
Edvard Munch

See all
artworks from
Edvard MunchDiscover