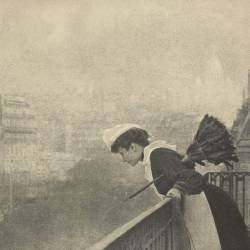 Constant Puyo was born in 1857 in Morlaix, Finistère. He studied at the Ecole polytechnique before joining the army as an officer in the artillery. He quickly devoted himself to painting and drawing, and then, in the 1880s, developed a passion for photography. In 1894, he joined the Photo-Club of Paris and became its president in 1921. In the meantime (in 1902), he finally left the artillery with the rank of commander and concentrated solely on his career as a photographer. Puyo died in 1933 in Morlaix.

Constant Puyo was a Pictorialist photographer of the late 19th and early 20th century. His famous works are "Montmartre", "Campagne romaine" and "Gondolier à Venice".

Constant Puyo was particularly linked to Nadar and Robert Demachy.