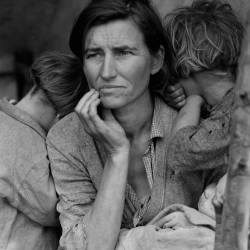 Dorothea Lange has been called the greatest American documentary photographer and photojournalist (1895-1965). She worked prominently during the Great American Depression between 1937 and 1942, period which revealed her celebrated iconography. At the boom time of journalism, she was missioned by the Roosevelt government to promote the New Deal Program created to restore American prosperity. She participated in the photographic documentation of rural areas on behalf of the Farm Security Administration (FSA) created in 1937 by the US Ministry of Agriculture to combat rural poverty. Her unique photography was used to provide a maximum of information and documentary evidence to convince and justify Congress and the general public of those reforms aimed to maintain period prosperity. Her life-like photographs portray the economic distress of her subjects. The intimacy and realism of her camera shots provide honest and humane record of the Great Depression. One immediately recalls the photographer’s Migrant Mother (1936), portrait of Florence Owens Thompson and children as true symbol of this period. The mother appears troubled whilst her youngsters burry themselves in her shoulders. The anxiety and drama of the scene are perfectly palpable with its almost religious luminosity. This incomparable work bears witness to the humanistic qualities of the photographer.

Mother and baby of family on the road
Dorothea Lange

Children playing in the gutter in New...
Dorothea Lange

Pea Pickers Line Up on Edge of Field...
Dorothea Lange