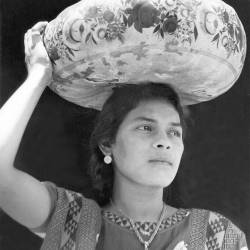 She was an Italian photograph that spent the major part of her life in the New World where she was successively a worker, an actress, a model and the muse and the model of photographs, before becoming one herself. Modotti was raised in Austria before moving back to Italy with her family where she stayed until her seventeenth birthday, date where she moved to San Francisco in order to be reunited with her father and one of her sisters. In 1918, she moved to Los Angeles where she became a famous actress of silent film and Edward Weston’s model, her soon-to-be lover. It is him who encouraged her to pursue photography, a medium she then used in order to document the fight of Mexican communists and workers, but also their everyday life : indeed, in 1923, the couple moved in Mexico and Modotti’s first print were of still lies, architectures and portraits. Her photographs are clear and focus on details and decontextualized objects before being documentaries of the Mexican social fight that took place during the end of the 1920s. Starting from 1925, she progressed in Mexican modern artists’ social circles  but also in the left wing parties : she joined the Communist party in 1927 and devoted herself to the documentation of this struggle by creating strong images that combines political and social reflexion to a formal elegance formed by her technique that renders sharp and precise lines and images. In 1929, her new lover, Julio Antonio Mella, the founder of the « internationalized » Cuban Communist Party, is assassinated and the Mexican government tried to condemn her for the murder. She was innocented, but exiled from Mexico where she returns only ten years later, after travelling across Europe that lead her to Berlin, Moscow, Madrid and Paris.

Construction Workers at the Stadium,...Tina Modotti

Hands of a Construction Worker,...Tina Modotti

Hands of a Woman, MexicoTina Modotti

Hands of the puppeteerTina Modotti

In the Zoological Garden, Berlin,...Tina Modotti