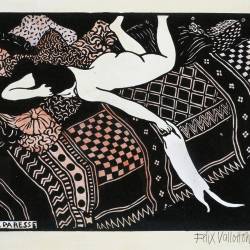 Félix Vallotton was born on December 28, 1865 in Lausanne. He was a Swiss painter, sculptor, wood engraver, novelist and art critic who became a naturalised French citizen in 1900. Vallotton moved to Paris where he attended painting lessons at the Académie Julian. There, he met many post-impressionist artists who inspired him and allowed him to develop his style. Over the course of the next ten years of his career, he earned an international reputation, supported by the Nabis movement. In 1893, Vallotton joined the group, led by Paul Gauguin. He then devoted himself solely to his art, inspired by Van Gogh and Cézanne. Outdoor scenes, nudes and still lifes were a real source of inspiration for Félix Vallotton, as was the First World War. This subject, although tragic, enabled him to restore his success, which had been somewhat weakened over the years, and to place him among the greatest artists of his generation. Félix Vallotton died in Paris on December 29, 1925.

See all
artworks from
Félix VallottonDiscover