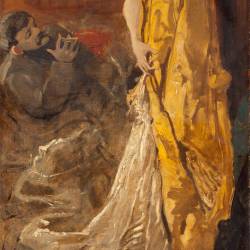 Henri de Toulouse-Lautrec was born on November 24, 1864 in Albi. Toulouse-Lautrec led a singular life: son of a nobleman, his growth was halted at the age of 14 as a result of bone degeneration, which handicapped him his entire life. At a very young age, he turned to painting. He trained with a family friend, René Princeteau, and then entered the Ecole des Beaux-arts in Paris. At the age of 21, he opened his own studio in Paris, near Montmartre. Toulouse-Lautrec's true master was Edgar Degas, who inspired him by his Parisian subjects and his love of drawing.  The artist frequented the Montmartre neighbourhood, where he sketched passers-by, customers and celebrities of the time. He also made posters for Parisian cabarets, such as the Japanese Divan. He was influenced by Japanese prints, as was Mary Cassatt. Like his master Degas, Toulouse-Lautrec painted the women of his time, “les petites femmes parisiennes”, and especially the dancers they often encountered in cabarets. His riotous living and following a physical and moral collapse, Henri de Toulouse-Lautrec died on September 9, 1901 at the Château Malromé, in Saint-André-du-Bois.

At the Moulin Rouge: The Dance
Henri de Toulouse-Lautrec