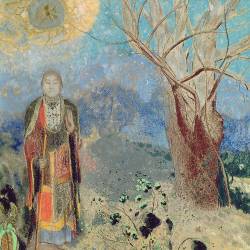 Odilon Redon was born on April 22, 1840 in Bordeaux. He spent his childhood in the countryside before moving to Paris at the age of twenty. There he first studied architecture and then joined the studio of the painter Jean-Léon Gérôme. After returning from the Prussian War, he married a young Creole woman and became friend with the artist Rodolphe Bresdin who enabled him to develop his art to its full potential. In 1886, he was invited to the Salon des XX in Brussels, the largest platform of the European avant-garde, which proves his international success. Two periods can be distinguished in Odilon Redon's work: one, populated by anguished monsters that he represented in dark lithographs, and the other, much brighter and more colourful, done in pastels. The Golden Cell is a good example of his first period: he was inspired by Christian imagery and Buddhist symbolism, which scholars believe is reflected in his work. For Redon, artists were the ones who could best see the afterlife. He paved the way for the surrealist exploration of the unconscious in his time. Odilon Redon died on July 6, 1916 in Paris.

The Chariot of Apollo
Odilon Redon

Anemones and Lilacs in a Blue Vase
Odilon Redon

Anemones in a Jug
Odilon Redon

Bouquet of Flowers in a Japanese Vase
Odilon Redon

See all
artworks from
Odilon RedonDiscover