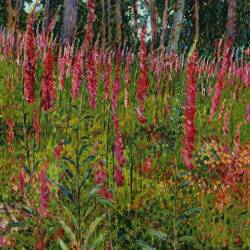 Georges Lacombe was born on June 18, 1868 in Versailles. His parents were artists and he received a mixed education, between religious school and arts training. He then trained at the Académie Julian. From 1889, Lacombe spent all his summers in Brittany where he met Paul Serusier, a Nabis painter, and joined the movement. His works then take up Breton figurative scenes and stylised seascapes. In 1893, Lacombe met Paul Gauguin and was influenced by him for a long time. Shortly afterwards, he begins woodcarving, which will earn him the nickname of "Nabi sculptor". During his career, he regularly exhibited at the Salon des Indépendants and the Salon d'Automne. Georges Lacombe died on June 29th 1916 in Alençon, Normandy.

Georges Lacombe was a Nabis painter and sculptor of the late 19th and early 20th centuries. His famous works are "Blue Seascape and waves", "Foxgloves" and "Boatwomen in Brittany".

The Ages of Life
Georges Lacombe