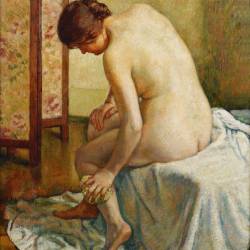 Theo Van Rysselberghe (1862-1926) was a Belgian painter and founder of the artistic group Les XX. His quick intellect, passionate and innovative art style, captivated collectors and critics alike. The conviction with which he related his thoughts on painting and art charmed his fellow artists. He co-founded and played an active role in “XX”, a collective of militant avant-garde artists. Inspired by his friendship with Georges Seurat, Van Rysselberghe began experimenting with divisionism and adopted a pointillist style, which led to some of his greatest works. This distinctive style of painting is characterized by a methodical and scientific technique of juxtaposing small dots of pure color together to maximize luminosity. The dots appear to intermingle and blend in the spectator's eye. Van Rysselberghe’s striking paintings demonstrate his ability to capture the effects of sunlight on the composition. Upon the death of his great mentor, Seurat, he discarded the pointillist technique and switched to a looser more realistic style.

Bathers by the SeaTheo van Rysselberghe

The Racecourse at Boulogne-sur-MerTheo van Rysselberghe

The Sea during Equinox,...Theo van Rysselberghe