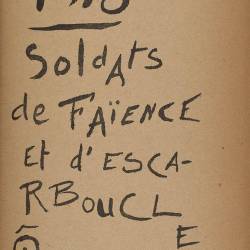 Originally from Poland, he moved to Paris in 1900 to devote himself fully to his writing. He began his artistic career with poems published in the newspapers under the name Apollinaris, derived from Apollo, the god of poetry. In August 1914, he decided to enlist in the French army, before officially becoming a soldier and obtaining French nationality the following December. During the fighting, he continued to write poems, inspired by Lou, his sweetheart; these would become the famous Poèmes à Lou. An injury to the temple caused by shellfire on 17 March 1916 weakened Apollinaire and he was forced to leave the battlefield. He then mingled with a number of artists, even inventing the term Surrealism; their inspiration led him to create Calligramme in 1918, the art of graphic poetry.

A range of flavours
Guillaume Apollinaire

Cotton in the ears
Guillaume Apollinaire

Far from the dovecote
Guillaume Apollinaire