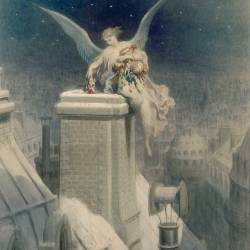 Paul Gustave Louis Christophe Doré, known as Gustave Doré, was born on January 6, 1832 in Strasbourg. Gustave Doré began his career as an artist at the age of eleven, and four years later he published a first album of his works, which was a great success. He then moved to Paris where he was inspired by the artistic vigour of the city. However, his creativity was still strongly carried by Alsace, where he spent his childhood. Although Doré enjoyed great success with the caricatures he published in the press, it was his paintings that owned him a great renown during his lifetime. His works are dark and tinged with pain and fear. They bear witness to a certain anguish, but also to a very refined idyllic imagination. Gustave Doré died on January 23, 1883 of a heart attack.

An Incident during the Siege of Paris
Gustave Doré

Between Heaven and Earth
Gustave Doré

Landscape in the Vosges
Gustave Doré

See all
artworks from
Gustave DoréDiscover