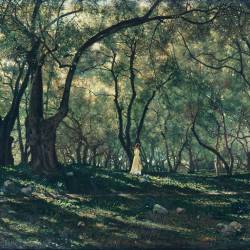 Henry Brokman was born in 1868 in Copenhagen. He studied at the Royal Academy of Fine Arts in Copenhagen, then travelled to Europe and went to Paris in 1886. There he continued his training at the Jalian Academy and discovered outdoor painting. From 1890 onwards, he travelled to Sicily and then to North Africa, where he married a rich American woman and had a son. Brokman exhibited at the Salon in 1903. He died in 1933 in Italy.