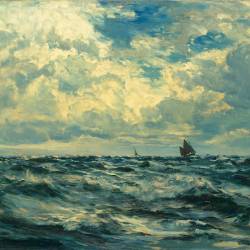 Henry Moore, is a painter, sculptor, watercolorist, illustrator, printmaker, visual artist, graphic designer, draughtsman born in 1898 in Castleford, United Kingdom and who died in 1986 in Much Hadham, United Kingdom. Henry Moore belonged to the romanticism art style. He mainly worked during the modern period in the 20 century.

Henry Moore is famous for the following art works : marine, matin brillant après la brise... which are numerous illustrations of his favorite subject of work : landscape, seascape... In order to stare at his work in a museum or gallery, you need to go to musée d'orsay, paris, france, . The art work of Henry Moore are, indeed, mainly kept in musée d'orsay, paris, france, . Muzéo offers high quality canvas prints & artprints of the main artworks made by Henry Moore to embellish your home or your office.

Henry Moore : his life as an artist

Henry Moore began his artist training in Royal College of Art, Royal Borough of Kensington and Chelsea, London, United Kingdom. He became friend or had a working relationship with Frances Hodgkins, Paul Nash, Lee Miller, Alice Rahon. He influenced the work of some other artists such as Alina Szapocznikow.

Learn more about the life and the works of Henry Moore here.
596880