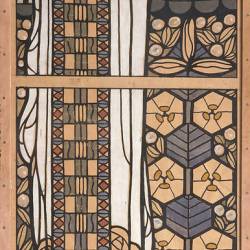 Koloman Moser ( 1868-1918) was an Austrian designer who contributed numerous innovations to twentieth century design. He studied at the Viennese Academy of Art and then the School of Arts and Crafts, his education lending an artistic touch to his approach to design, which was characterised by clean lines and the repetition of classical greek and roman motifs. He was part of the Viena Secession movement and founded the Wien Werkstätte, an innovative design atelier, where he worked on architecture, furniture, graphic, jewellery and tapestry design.

Venus in the Grotto
Koloman Moser

Back of a nude woman with ghosts
Koloman Moser

Clash of the Titans
Koloman Moser

Overview of Payerbach, in the...
Koloman Moser

The 14th Exhibition of the Vienna...
Koloman Moser