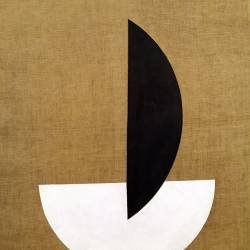 Laszlo Moholo-Nagy was born on July 20, 1895. Laszlo Moholo-Nagy first studied law in Budapest, before having to leave for the front when the First World War broke out. He then moved to Berlin. Laszlo Moholo-Nagy is best known for his photographs, but he was a self-taught artist who also practised watercolour and drawing. Under the influence of the Dada movement, he practised photomontage and in 1922 produced his first photograms. Alongside Walter Gropius, he was a teacher at the Bahaus School from 1923 to 1928. In 1934, he reoriented his artistic practice towards documentary photography. He was always looking for innovation and try to represent in his work the changing society of his time. He also wrote theoretical works on photography and designed sets for theatre and opera. Laszlo Moholo-Nagy died on November 24, 1946.

Poster for a Bauhaus exhibition in...
Laszlo Moholy-Nagy

See all
artworks from
Laszlo Moholy-NagyDiscover