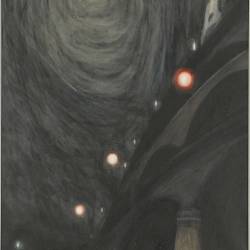 Léon Spilliaert was born in 1881 in Ostend, Belgium. As a self-taught artist he didn’t attend art school. He taught himself how to use oil paint, gouache, watercolour and wash, a technique he particularly appreciated. He painted his first works at the age of 19, when he became close to his colleague James Ensor, an avant-garde and anarchist painter from Ostend, and to Maurice Maeterlinck, a symbolist writer. Lacking studio practice, it is in literature that Spilliaert finds his inspiration, particularly in the writings of Nietzsche. Léon Spilliaert's artistic work can be linked to the Belgian symbolism of the late 19th century, which is characterised by a sense of anxiety and unease, and an attachment to the representation of solitude in sober tones and large areas of colour. In the second part of his life, he was particularly keen to paint the subjects of modern life: a walk in the forest and a Sunday in the park became a scene of wandering. Léon Spilliaert died in Brussels in 1946.

The Gust of Wind
Léon Spilliaert

Woman at the Edge of the Water
Léon Spilliaert

Woman on the Pier
Léon Spilliaert

Self Portrait with a Mirror
Léon Spilliaert

Girls at the Waves
Léon Spilliaert

See all
artworks from
Léon SpilliaertDiscover