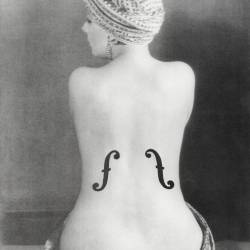 Man Ray, whose real name was Emmanuel Rudnitsky, was born in 1890 in Philadelphia. He began studying architecture but soon abandoned it to live off his art and devote himself fully to it. He left for New York in 1912 and met and befriended various avant-garde artists. He arrived in Paris in 1921 and surrounded himself with the Dada and Surrealist personalities of the time. Close to the anarchist movement, he freed himself from established conventions and allowed himself all originality. He presented a few ready-made works and then turned to photography: Man Ray's work is polyform, and he does not accept any hierarchy between the arts. Man Ray died in 1976 in Paris.

Man Ray was a painter and photographer of the 20th century. His famous works are "Les larmes", "Alphabet pour adultes : Beaucoup" and "Noire et blanche".