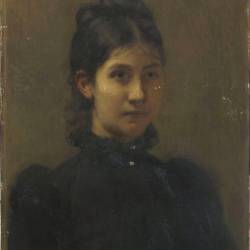 Suzanne Valadon was born on September 23, 1865 in Bessine-sur-Gartempe, France. Around 1870, she and her mother moved to Montmartre. After a short career as a circus acrobat, Suzanne Valadon began to pose as a model for various painters, including Pierre Puvis de Chavannes and Auguste Renoir. She learned the technique by watching these artists and began to draw and paint herself. In 1883, she gave birth to Maurice Utrillo. She quickly became noticed in the world of art and became the pupil of Edgar Degas. In 1894, Suzanne Valadon was the first woman admitted to the Société Nationale des Beaux-Arts. She exhibited for the first time at the Salon d'Automne in 1909. She died on April 7, 1938 in Paris.

Suzanne Valadon was a French painter of post-impressionism and fauvism. His famous works are "Les Baigneuses", "Portrait de jeune femme" and "Bouquet of Tulipes".

Bouquet of Flowers in Front of a...
Suzanne Valadon

House in the Rue Cortot in spring
Suzanne Valadon

See all
artworks from
Suzanne ValadonDiscover