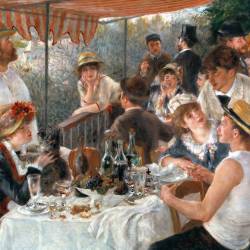 Pierre Auguste Renoir was born on February 25, 1841, in Limoges, France. He grew up in a modest household, his father being a tailor and his mother a seamstress. The family moved to Paris between 1844 and 1846 where he attended the local catholic school. Due to his family’s financial situation he had to become an apprentice to a porcelain painter and studied drawing in his free-time. In 1862, he entered the École des Beaux-Arts and worked in Charles de Gleure’s studio where he became friend with three other young artists: Frédéric Bazille, Claude Monet and Alfred Sisley. In 1864, he made his artistic debut at the annual Paris Salon where he presented La Esmeralda, a painting inspired by the famous character of Notre-Dame de Paris. During his early career, he faced financial difficulties and had, according to many biographies, no fixed address. In 1870, he was drafted into the army and had to take a break from his work. After the war ended in 1871, he eventually came back to Paris and in 1874 displayed six paintings at the first Impressionist exhibition alongside his friends: Pissarro, Monet, Cézanne and Edgar Degas. From now on, he adopted a bright palette and feathery brushstrokes. In the early 1880’s Renoir travelled across the continent, visiting Italy and Algeria. When he returned, he married Aline Charigot in 1890, his long-time friend. Towards the end of his life, he suffered from rheumatoid arthritis which left his fingers curled. Pierre Auguste Renoir died in December 1919 at his home in Cagnes-sur-mer, France.

See all
artworks from
Auguste RenoirDiscover