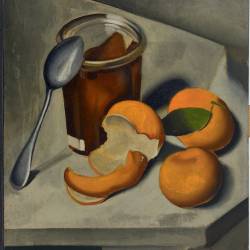 Tamara de Lempicka was born on May 16, 1898 in Warsaw, Poland. Coming from an aristocratic family, she received an excellent education from her sister Adrienne. In 1914, she went to live with her uncle in Saint Petersburg where she met the very rich princely family of Loussoupov. She fled Russia in 1917 and went to live in Paris where she became the pupil of Maurice Denis and André Lhote. Tamara de Lempicka exhibited for the first time in Milan in 1925. She made her first trip to New York in 1929 to meet the demand of a wealthy American and then exhibited successively in Poland, Paris and the United States. In 1939, Tamara de Lempicka fled the War and moved to the United States. She died on March 18, 1980 in Cuernavaca, Mexico.

Tamara de Lempicka was particularly linked to Maurice Denis and associated with the Art Deco movement.