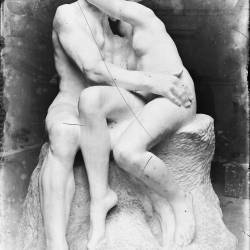 Auguste Rodin was a French sculptor born in Paris in 1840. At the age of 14, he started studying art. He first attended the Petite Ecole and then the school of Antoine Barye. The sculptor Carrier-Belleuse had a great influence on him. Rodin began to work for him in 1863. From 1870 to 1875, he went to Brussels and briefly to Italy, before returning to France. There, the government granted him a Parisian studio. Among his most famous creations are The Thinker, dating from 1902-1904, and The Kiss, dating from 1901-1904. Auguste Rodin is also known as a draughtsman, especially of bust portraits. His works are exhibited in the Rodin Museum in Paris, but also in the Rodin Museum in Philadelphia. He is also known for his monuments to Balzac and Victor Hugo. The works of Dante, Baudelaire and Michelangelo were a great source of inspiration for him. By making sculpture an art of self-expression, researchers consider him to have revolutionised the field of sculpture in his time. He died in 1917 in Meudon.

Detail of The Burghers of Calais
Auguste Rodin

Nude Female Lying on her Back
Auguste Rodin

The Age of Bronze
Auguste Rodin