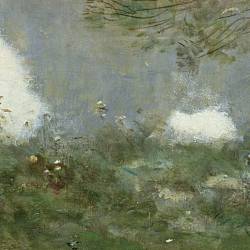 Jean-Baptiste Camille Corot was born on July 16, 1796 in Paris. After studying at the Charles Suisse Academy, he devoted himself entirely to painting. He made the traditional trip to Italie where the astonishing array of colours and luminosities inspired his art. Despite being recognized by neoclassicals and “modern” painters, it was not until the 1850s that Corot became successful. The painter, who had begun to paint thanks to his genius, had now perfected his talent. He very often depicted landscapes shimmering with gold and silver (Souvenir de Mortefontaine, 1864) and dreamlike contemplations of memories which. His approach to light earned Corot the name of "father of impressionism". Jean-Baptiste Camille Corot died on February 22, 1975 in Paris.