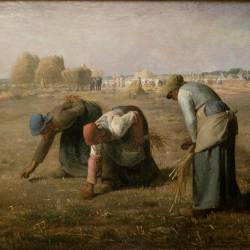 Jean-François Millet was born on October 4, 1814, in Gruchy France. Born and raised in the family farm, he spent the first 20 years of his life working the fields. He was mainly educated by his uncle, a literate priest who introduced him to French and English literature. Thanks to his father’s contacts in the local bourgeoisie, he entered the School of Cherbourg in 1834, as Paul Dumouchel and Théophile Langlois de Chèvreville’s student. At that time opened the Thomas-Henry museum, where he copied great Flemish and Spanish masters’ paintings. Eventually, the city council and the Manche General Council offered him a scholarship to pursue his artistic learning in Paris. He moved to Paris in 1837, and entered the École des Beaux-Arts as Paul Delaroche’s student. Two years later, after failing two times wining the Prix de Rome, he lost his scholarship and had to leave Paris. Back in Cherbourg he made a living selling portraits of family members and erotic paintings thus abandoning scenes from peasant life. In 1847, his Vanneur made the headlines at the Salon, an ambitious work which marked a turning point from previous idealized pastoral subjects, favouring a more realistic and personal approach. Jean-François Millet died on January 20, 1875, in Barbizon, France.

Back of a Reaper
Jean-François Millet

See all
artworks from
Jean-François MilletDiscover