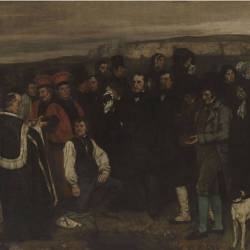 Gustave Courbet was born on June 10, 1819 in Ornans. Courbet received an artistic training at the age of twelve at the minor seminary, before joining a class specialising in fine arts. Even though he as a mediocre student, he decided to move to Paris to study law. However, his meeting with Nicolas-Auguste Hesse, a history painter, encouraged him to pursue an artistic career. Courbet then decided to study at the Charles Suisse Academy, where he developed a new artistic movement called Realism. This new movement, of which L'Après-Dinée à Ornans was the first painting, quickly brought him a certain notoriety. His artistic genius was rewarded with a second-class medal, prompting the painter to seize the opportunity to overturn artistic codes. His interest for politics, led him to set aside his brushes to become one of the elected members of the Paris Commune in 1871. Accused of having organized the overthrow of the Vendôme column, he was forced to resign and raise it at his own expense, while in exile in Switzerland. Gustave Courbet was one of the greatest painters of the modern period, and of the realism style. His famous works include An Afternoon at Ornans, A Funeral at Ornans, The Origin of the World, The Desperate, Wrestlers. Throughout his career, he was particularly close to Louis-Augustin Auguin, Hippolyte Pradelles, Jean-Auguste-Dominique Ingres and Eugène Delacroix. Gustave Courbet died on December 31, 1877 in Switzerland.

he Clairvoyant or, The Sleepwalker
Gustave Courbet

See all
artworks from
Gustave CourbetDiscover