JOIN OUR MAILING LIST TODAY
Enjoy exclusive discounts, News about the art scene and much more !
Register now and enjoy 10% off your first order !
SUBMIT
Carolus-Duran 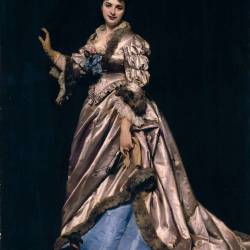 Carolus-Duran was born on July 4, 1837 in Lille. After drawing classes at the Lille Academy, Carolus-Duran arrived in Paris in 1853 to study painting. Having few means and unable to count on his modest family, he had to provide for himself. This led him to compete for the Wicar Prize of his hometown, which he won in 1862. Carolus-Duran then left Paris for Rome until 1865 to study the Italian masters. He missed the birth of modern painting in 1863. On his return from Rome, he went to Spain for a year to study Velázquez. Carolus-Duran exhibited at the Salon from 1866 to 1889 and ended his career as director of the Académie de France in Rome. He died on February 18, 1917 in Paris.

Carolus-Duran was a painter, mainly known for his portraits of people of high society in the middle of the 19th century. His famous works are "La dame au gant", "Mademoiselle de Lancey" and "Hébé".

See all
artworks from
Carolus-DuranDiscover