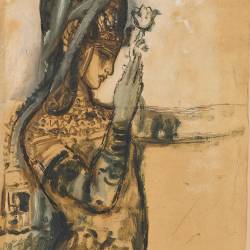 Gustave Moreau was born un 1826 in Paris. His father was an architect of the city of Paris and from a young age he set himself up to be a painter. In 1846, he entered at the Ecole des Beaux-Arts as François Picot’s student, an academic painter. His learning is the one of a classic painter but quickly Moreau is drawn by the colourist approach of Théodore Chassériau, Eugène Delacroix and Renaissance masters such as Mantegna and Leonardo.

Moreau became suddenly famous thanks to his painting Oedipus and the Sphinx which was exhibited at the Salon of 1864. This painting summaries Moreau’s typical style by featuring an allegorical subject belonging to the Greek mythology and sacred history and a hieratic standing figure. It is considered as one of his first paintings embracing the symbolist movement of which Moreau will then be considered as one of the founding fathers.

Symbolism is an intellectual movement which flourished in France in the final decades of the 19th century in both arts and literature. Symbolist artworks usually evoke certain moods and feelings. Famous symbolist French artists are Odilon Redon and Puvis de Chavannes.Besides Moreau’s crucial take in the symbolist movement, his greatest influence lies in the lessons he gave at the professor at the Beaux-arts.

When he died in 1898, Gustave Moreau bequeath his townhouse and everything it held to the French government, which included no less than 1200 paintings and watercolours and around 7000 drawings. His work is now displayed at the Gustave Moreau Museum in Paris.

See all
artworks from
Gustave MoreauDiscover