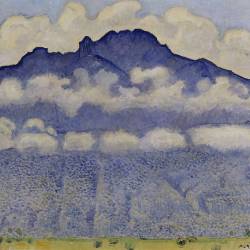 Ferdinand Hodler was born on March 14, 1853 in Bern, Switzerland. Hodler's life was very quickly marked by the successive deaths of his family: his father and two brothers died when he was only eight years old, and his mother, after remarrying a decorative painter, died of tuberculosis. In 1865, he took over his alcoholic stepfather's studio. In 1872, he moved to Geneva and produced paintings directly inspired by the Swiss realism of artists such as Albert Anker and Rudolf Koller. After a trip to Spain in 1878, his art evolved: his compositions became more abstract and he adopted earthy tones dominated by light grey hues. However, he was not recognised by his contemporaries until he turned to Symbolism in the last decade of the century. At that time, he met Pierre Puvis de Chavannes in Paris, whose work inspired him to attempt to create great mural compositions, as well as to transform forms and colours into fundamental decorative elements. It was also during this period that Hodler, a keen landscape painter, began to stylize his themes to such an extent that his lakes and mountain gradually became metaphors for eternity. From Swiss realism, he later became fascinated by Symbolism. He then joined the expressionist movement that was emerging in Germany at the end of the 19th century. His versatile interests enable him to create a style of his own, called "parallelism". It emphasized symmetry, rhythm and harmony with nature, which for Hodler were the basis of human society. The artist struggled to make a name for himself in France, which considered him too expressionist, and later was ostracized by German art societies when he protested against the German artillery shelling of Reims. He died leaving many unfinished landscapes. Ferdinand Hodler died on May 19, 1918 in Geneva (Switzerland).

Nine Swans in Front of a Montainous...
Ferdinand Hodler

A View of Lake Brienz from Bodeli
Ferdinand Hodler

At the Foot of Petit Salève
Ferdinand Hodler

At the Foot of Petit Salève
Ferdinand Hodler

See all
artworks from
Ferdinand HodlerDiscover