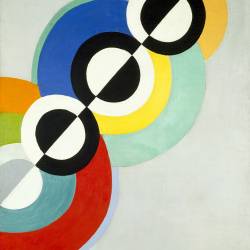 Robert Delaunay was born in Paris in 1885 among a wealthy family. From a young age he attended the modern events in Paris, such as Universal Exhibitions. He began his artistic training with his uncle Charles Damour. After his military service, he participated in the Salon des Indépendants and began to socialize with the avant-garde. In 1909, he met Sonia Stern, also an artist, and married her the same year. He became friends with the painter Wassily Kandinsky, who allowed him to be exhibited in Moscow, and then with Guillaume Apollinaire. Because of its diversity, Delaunay’s work is complex: he contributed to the development of cubism, to its ramifications, and then fully committed to abstraction. Robert Delaunay died in 1941 in Montpellier.

The city of Paris
Robert Delaunay

Rhythm No. 2 decoration for the Salon...
Robert Delaunay

See all
artworks from
Robert DelaunayDiscover