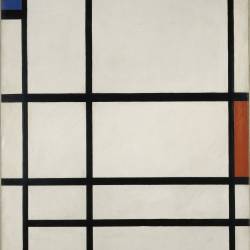 Piet Mondrian (1872-1944) was a Dutch painter, considered one of the leaders of Abstract art.

He studied at the Academy of Arts in Amsterdam where he experimented with a range of styles from Realist landscapes to Fauvism and Pointillism. From here he was influenced by artists such as Jan Toorp, Jan Sluyters, Edvard Munch and Van Gogh, which led him away from a natural treatment of colour towards a concern for pure colour. His desire was for painting to be a universal language. In 1912 he discovered Cubism in Paris which introduced him to the idea of the grid and from 1913 he began to create the abstract canvases for which he is most famous, such as Composition no. II. From this moment on Mondrian deepened his research into abstraction and developed his style , as is demonstrated by such works as Composition with Black Lines, 1917.

Mondrian was an active member of many of the leading Avant-garde movements of the early 20th century.

Composition in Colour A
Piet Mondrian

Anemones in a Vase
Piet Mondrian

Composition in Colour B
Piet Mondrian

See all
artworks from
Piet MondrianDiscover