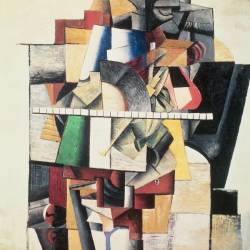 Kazimir Malevitch was born on February 11, 1878 in Kiev (Imperial Russia). He was initially an industrial draughtsman. Malevitch was a self-taught artist : between 1906 and 1910, he tried out realism, impressionism, symbolism, Cézanneism, fauvism, cubism, German expressionism and suprematism. Painter, sculptor and theorist, he was one of the first abstract artists and created his own movement: Suprematism. After starting to study art in Kiev, he left his school to join the Moscow School of Painting, Sculpture and Architecture. From 1910 onwards, Kasimir Malevich appeared as an influential member of the Moscow avant-garde, whose works advocated the liberation of colour from form. His analysis of Cubism led him to favour the purest pictorial plane. His Suprematism compositions created from 1915 onwards, were the first pictorial works entirely devoid of any object reference and claiming their own realism, the geometric forms gradually becoming self-sufficient pictorial beings. This "non-objective" art allowed Malevich to transform the act of painting in almost a mystical experience as his compositions became cosmic voids in which forms and colours evolved together. Following the October Revolution of 1917, Kasimir Malevich obtained various positions in art schools and influenced several artists, including El Lissitzky, whom he met in Vitebsk. He was appreciated by the regime. However, his return to symbolist figuration in the 1930s displeased the theoreticians of socialist realism who governed all artistic fields. In 1929, he was classified as a subversive artist and in the 1930s attacks against him multiplied. He was imprisoned and subjected to long interrogations. It was during this period that he produced his last painting, The Running Man... To His Death? His monochrome and non-figurative works, which attempted to transform man's relationship with space and colour, was more influential in the West than in the USSR, where it did not reappear until 1988. Kazimir Malevich died on May 15, 1935 in Leningrad (Russia, now St Petersburg).

Woman with a rake
Kazimir Malevitch

Head of a Peasant
Kazimir Malevitch

The Girl with the Hat
Kazimir Malevitch

A Butcher Came Along to Lodz
Kazimir Malevitch

See all
artworks from
Kazimir MalevitchDiscover