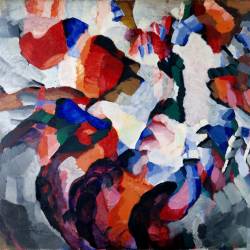 Frantisek Kupka was born on September 22, <span "'="">1871 in Opocno, Eastern Bohemia (present-day Czech Republic). In 1884, he began his studies at the Fine Arts School in Prague, which he then continued in Vienna. He completed his studies by self-taught learning of literature, philosophy, natural history or even occultism. He moved to Paris in 1896, where he earned his living as an illustrator for the satirical newspaper L'Assiette au beurre. He then turned to the illustration of literary works. He resumed his studies in 1905 at the Sorbone in a course of philosophy in 1905. Kupka exhibited at the Salon d'Automne in 1911, which preceded his stylistic change, a year later, to non-figurative art. He exhibits two abstract paintings at the Salon d'Automne in 1912, which makes him one of the protagonists of this style in France. In 1931, he was one of the founders of the Abstraction-Creation movement. Kupka died on June 24, 1957 in Puteaux.