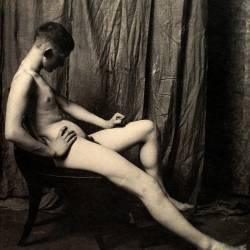 Thomas Eakins was born on July 25, 1844 in Philadelphia (USA). Thomas Eakins is considered by historiography to be one of the greatest American painters of the late 19th century. Although he lived for only three years in Paris, the centre of all artistic innovations in the second half of the 19th century, his work constitutes an important link between American and European art. In 1861, he was admitted to the Pennsylvania Academy of Fine Arts, where he stayed for five years before going to Paris. There he studied in the studio of Jean-Léon Gérôme, an artist to whom he was attracted by the sincerity of his line and the realism of his subjects. As soon as he was admitted to the Pennsylvania Academy of Fine Arts, Eakins learnt to draw from a model rather than from an antique, and became interested in anatomy, which he studied at Jefferson Medical College. His visit to the studio of Léon Bonnat shortly before his return to the United States encouraged his search for realism as he discovered the masters of the Spanish Golden Age and their works tinged with a realism exacerbated by the use of chiaroscuro. On his return to the United States in 1869, he broke away from academic subjects in order to focus on everyday themes, which he treated in a crude manner and with frank colours. His taste for realism also included a precise representation of the body. He then prescribed the study of the nude, putting photography at the forefront of his method and drawing inspiration from the processes of decomposition of movements developed by Marey and Muybridge. In 1876, Thomas Eakins began teaching at the Pennsylvania Academy of Fine Arts. There he gave lessons about perspective, anatomy and experimented with photography with his students. However, his career ended when he had a male model pose completely naked in an all-female class in 1886. He continued to teach at other academies before gradually falling into oblivion at the dawn of the 20th century. Thomas Eakins died on June, 25 in 1916 in Philadelphia (USA).

Study for the painting "The Swimming...
Thomas Eakins

See all
artworks from
Thomas EakinsDiscover