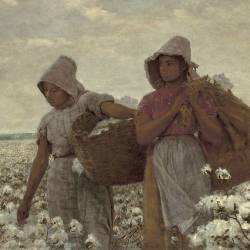 Winslow Homer was born on February 24, 1836 in Boston (USA). Winslow Homer is an American painter best known for his seascapes and considered one the most important figures of a movement called American realism. He started as a lithographer in Boston. In 1859, he moved to New York where he studied painting almost on his own. His seascapes are influences by the painters of the Barbizon School, whom he discovered during his trip to France in 1867. In the 1870s, he returned to the United States and mainly painted rural landscapes and idyllic farm life scenes. The colour rendering in this works is described by his contemporaries as sumptuous. Moreover, the detail accuracy of his paintings is considered one of the distinctive features of the painter’s style. He used oil on canvas and watercolours, which gives his work a vigorous aspect that is often associated with the Impressionism movement. He is also liked to other American artists, such as John Singer Sargent and Thomas Eakins, two leading figures of the realism movement. Winslow Homer died on September 29, 1910 in Prouts Neck (USA).

Returning from the Spring
Winslow Homer

A Game of Croquet
Winslow Homer

Girl in a Hammock
Winslow Homer

Houses on a Hill
Winslow Homer

Moonlight on the Water
Winslow Homer

See all
artworks from
Winslow HomerDiscover