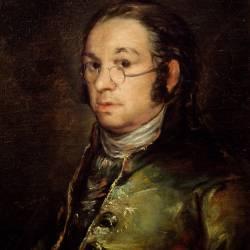 Francisco De Goya (1746-1828) was a Spanish Romantic painter , often referred to as one of the last 'Old Masters' and one of the first 'Modern Masters'. On the cusp of this key moment in Art History, Goya's work combined a great many inspirations and observations from his time and had a great influence on many artists after him.

Goya's reputation began after executing a series of frescos for his local cathedral in Saragossa. He then went on to design for the Royal Tapestry factory in Madrid, a practice which allowed him to experiment with genre scenes. A keen observer of all that surrounded him, Goya also took inspiration from Neoclassicism and the Velazquez works he was able to see in the Royal collection. Between 1795 and 1797 he was the Director of the Royal Academy before being appointed Royal court painter in 1799 where he was highly favoured.

During the Napoleonic invasion and the Spanish war of Independance of 1808-1814 he worked as the court painter to the French. His paintings from this period, such as The Third of May 1808, 1814, reflect his contempt for the horrors of war. After the restoration of the Spanish monarchy he was pardoned for his role with the French however was not liked by Spain's new King, who even called into question Goya's La maja desnuda (1790), at the time one of the few nudes of this style in Spanish painting.

Consequently Goya lived in seclusion outside Madrid between 1819-1824, during which time he executed a series known as 'The Black Paintings' which included many dark and twisted visions. From 1824 Francisco De Goya lived in voluntary exile in France until his death in 1828.

Saturn Devouring one of his Sons
Francisco de Goya

A Woman and two Children by a...
Francisco de Goya

Allegory of the City of Madrid
Francisco de Goya