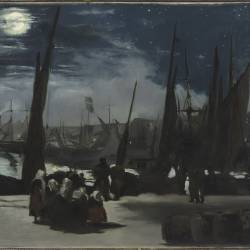 Edouard Manet was born on January 23, 1832 in Paris. He grew up in an upper-class household with strong political connection. His mother was the daughter of a diplomat and the goddaughter of the Swedish crown prince. His father was a high-ranking judge. Both of his parents had envisioned for him a great career in law, it was his uncle who introduced him to painting by taking him to the Louvre. He also encouraged him to enter a special course of drawing in 1845. To comply his father’s expectations, he sailed on a training vessel to Brazil in 1848. But after failing twice the entrance examination to join the Navy, the devoted himself to painting. From 1850 to 1856, he studied alongside Thomas Couture, a renowned academic painter of his time before opening his own studio. Le Buveur d'absinthe is a fine example of his early paintings which were characterized by a strong realism inspired by Gustave Courbet. His subjects of choice were beggars, people in cafés and singers. He made his artistic debut at the Salon of 1861, where two of his paintings were accepted. His major work is the controversial Le déjeuner sur l’herbe, originally named Le bain. Perceived as indecency at the official Salon, the canvas was exhibited at the Salon des Refusés in 1863. The following year, Manet created another scandal, presenting to the salon jury members Olympia a striking portrait of a prostitute. In 1863, he married Suzanne Leenhoff, a Dutch-born piano teacher. He then travelled to Spain, where the work of painters such as Diego Velasquez and Francisco Jose de Goya had a great influence on his paintings. Edouard Manet died in April 1883 in Paris, leaving behind him a great legacy of 420 paintings.

Luncheon on the Grass
Edouard Manet

A Bar at the Folies-Bergere
Edouard Manet

A Bundle of Asparagus
Edouard Manet

See all
artworks from
Edouard ManetDiscover