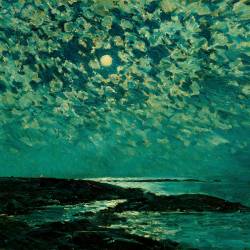 Childe Hassam was born on October 17, 1859 in Dorchester, USA. He began his career early as an apprentice for a local engraver, then studied at the Boston Art Club. In 1886, Hassam went to Paris where he studied at the Julian Academy with Gustave Boulanger and Jules Joseph Lefebvre. He returned to America in 1889 and moved to New York, where he began to paint a series of paintings depicting buildings in the city. Childe Hassam died on August 27, 1935 in East Hampton, USA.

Childe Hassam was an American impressionist painter. His famous works are "The Fourth of July", "The Rose girl" and "Moonlight, isle of Shoals".

The Fourth of July
Childe Hassam