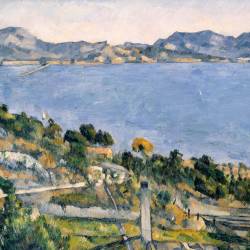 Paul Cézanne was born on January, 19, 1839 in Aix-en-Provence. His father co-founded a banking firm in 1848 that prospered throughout the artist's life affording him a financial security and later a large inheritance. In 1857, he attended drawing lessons, but to comply his father's wishes quickly abandoned to attend law school at the University of Aix. He only began his artistic training when he left his native region for Paris in 1861 and entered the Académie of Charles Suisse in Paris.
His early works were dark and tainted with fear. It's his meeting with Pablo Picasso that led him to lightened his palette and his touch. From now on he focused on the study of nature and the representation of solid, three-dimensional features on the flat surface of a canvas. He developed an entirely original pictorial language in which depth and solidity are created not through conventional perspective and modelling, but by subtly varying colours and by distorting and tilting forms. Throughout his life, his main concern was to develop an authentic observation of the seen world, painting the same motifs over and over again trying to figure out the most accurate method of representing nature.
His work had a deep influence on 20th century artist, his painting paved the way for cubism and abstract art. Often considered as the greatest of the Postimpressionists, he can be seen as the "father of modern art”. Paul Cézanne died of pneumonia in 1906, in Aix.

The Banks of the Marne at Creteil
Paul Cézanne

See all
artworks from
Paul CézanneDiscover