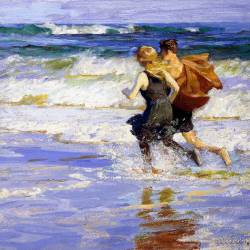 https://en.muzeo.com/sites/default/files/styles/image_basse_def/public/oeuvres/paintings/modern/at_the_beach137186.jpg?itok=zKrS3OAw
Reproduction d'art
At the Beach
(Edward Henry Potthast)
From 34 €From £28.9From 28.33 € HTFrom Excl. VAT £24.08

Edward Henry Potthast was born on 10 June 1857 in Cincinnati, USA. He studied at the McMicken School of Design from 1870 and worked as a lithographer until 1881. He then travelled to Europe and studied at the Academy of Fine Arts in Antwerp and Munich. He moved to Paris in 1886 where he discovered the work of the French Impressionists. Potthast finally returned to Cincinnati in 1889 and exhibited at the Cincinnati Art museum. In 1895, he moved to New York where he worked as an illustrator for various magazines. In 1906, he exhibited for the first time at the American Academy of Fine Arts and was elected there. Potthast died in 1927 in New York.

Edward Henry Potthast was an American impressionist painter. His famous works are "Stormy seas", "At the Beach" and "Hourtide".

At the Seashore
Edward Henry Potthast

By the Water
Edward Henry Potthast

Children at Play on the Beach
Edward Henry Potthast