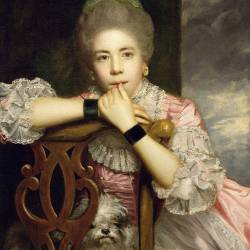 Joshua Reynolds was born on July 16, 1723 in Plympton Saint Maurice (England).  While English artists struggled to establish a national school, the art of portraiture, a genre that had been dominant since the reign of Henry VIII, developed and was nourished by contributions from continental Europe. Joshua Reynolds gradually established himself as the main architect of the revival of this genre by adding a great variety of poses and a certain dignity to his figures. His art, nourished by the study of Rembrandt, Rubens and Van Dyck, was the result of his education at Balliol College, Oxford. In 1740, he moved to London where he worked in the studio of the portraitist Thomas Hudson. Between 1749 and 1752, Joshua Reynolds completed the Grand Tour of Italy and then settled in London where he enjoyed a great reputation. Indeed, when the Royal Academy was founded in 1768, Reynolds was elected as its first President. Reynolds' work, in its abundancy and variety, helped English painting to evolve from its long association with Dutch art. The liberty he took with his compositions allowed a new attention to the personality of the model and raised the portrait to the rank of a major genre in Great Britain. Joshua Reynolds died on February 23, 1792 in London (England).

Portrait of a Girl
Joshua Reynolds

See all
artworks from
Joshua ReynoldsDiscover