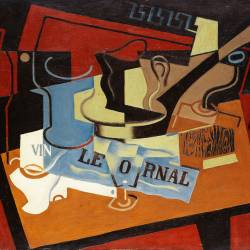 Juan Gris (1887-1927) was a Spanish artist and notable member of the Cubist movement. After studies in Madrid, Gris moved to Paris in 1906 and met Henri Matisse, Georges Braque and Fernand Léger. Influenced by his avant-garde contemporaries and also significantly by Pable Picasso, Gris began painting seriously in 1910 and exhibited his first work in 1912 at the Salon des Indépendants, entitled 'Hommage to Pable Picasso'. His belief in the importance of mathematics in painting led him to be a swift adopter of PIcasso and Braque's Cubist style. His earlier works he categorised as Analytical cubism before moving towards a form of Synthetic cubism, concerned with collage in 1913. Unlike Picasso and Braque, Gris was influenced by Matisse to create compositions of bright, harmonious colour combinations.

Composition on a Table
Juan Gris

The Bottle of Bordeaux
Juan Gris

Ace of Clubs and Four of Diamonds
Juan Gris

See all
artworks from
Juan GrisDiscover