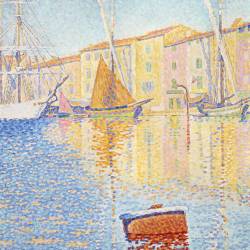 Paul Signac was born on November 11, 1863 in Paris. Although Paul Signac was born into a family of saddlery merchants, he quickly developed an interest in art. From the age of 16, he visited the Impressionist exhibitions and was impressed by this new art form, whose researches were clashing with the academic artistic production. In 1882, he began to paint in Montmartre, the centre of the bohemian artistic lifestyle at the end of the 19th century. Signac became friend with the Symbolist writers, Monet and took part in the first Salon des Indépendants in 1884 where he met Georges Seurat. This decisive meeting marked the beginning of Signac's collaboration with Seurat and Camille Pissarro, with whom he formed the group of "scientific impressionists”. The two artists worked according to the practice of scientific division of tone, i.e. according to the empirical technique of pointillism, which consists of dividing the tones into very small patches of pure colour pressed together so that the viewer perceives a unity of tone when observing the composition from a distance. The death of Seurat in 1891 had a huge impact on Paul Signac, who tried to free himself from the idea of painting “d’après nature” and thus painted his Tropezian landscapes unrealistic colours. Paul Signac died on August 15, 1935 in Paris.

The Harbor of Antibes
Paul Signac

The Clocktower at Saint-Tropez
Paul Signac

The Seine at Saint-Cloud
Paul Signac

See all
artworks from
Paul SignacDiscover