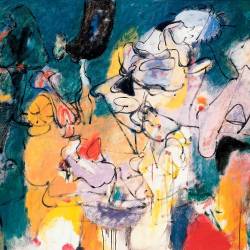 Arshile Gorky was born on April 14, 1904 in the Ottoman Empire, in Turkish Armenia. His father fled to America to avoid Turkish military service when he was only 3 years old. Very affected by this episode, he also fled to America at the age of 16, after having escaped the Armenian genocide and having seen his mother die of starvation. He worked as a labourer while attending night classes at the Rhode Island School of Design in Providence. In 1926, he became a professor of drawing at the Grand Central School of Art in New York. Initially inspired by Cézanne, he was later influenced by the works of Picasso. In 1938, his art made a major shift from cubism to surrealism. André Breton, who had just arrived in the United States, admired him greatly. Arshile Gorky committed suicide in 1948, at the age of 44, following a series of traumatic events: some of his works burned with his studio, his wife left him, his neck was broken and his arm temporarily paralysed in a car accident, and he underwent a major operation to treat cancer.

Arshile Gorky was a 20th century abstract and surrealist painter. His famous works are "Year after Year", "Virginia Landscape" and "Nighttime, Enigma and Nostalgia".

Arshile Gorky was particularly close to Paul Cézanne and Picasso.

The artist and his mother
Arshile Gorky