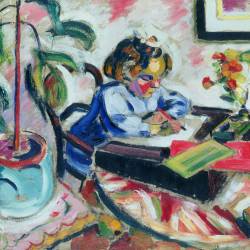 Henri Le Fauconnier was born on July 5, 1881 in Hesdin, in the north of France. From 1900, he began studying law in Paris before joining the Académie Julian. He exhibited for the first time in 1904 at the renowned Salon des indépendants. He then moved to Brittany to paint landscapes and exhibited at the Salon d'Automne in 1908 and 1909. More trad, he left France for Russia and settled in Moscow, where he became friends with Wassily Kandinsky. Back in Paris, he frequented the group of Puteaux alongside Amedeo Modigliani. With the outbreak of the First World War, Le Fauconnier left France for the Netherlands. He died in 1946 in Paris, forgotten by all.

Henri Le Fauconnier was a French Cubist and Expressionist painter of the 20th century. His famous works are "The Huntsman", "Little Schoolgirl" and "The Lake".

Study for the Head of Abundance
Henri Le Fauconnier