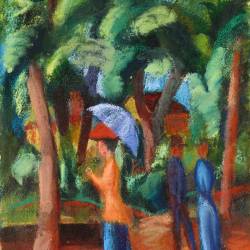 https://en.muzeo.com/sites/default/files/styles/image_basse_def/public/oeuvres/paintings/modern/a_stroll_in_the_park138369.jpg?itok=qpqh2tmz
Reproduction d'art
A Stroll in the Park
(August Macke)
From 40.92 €From £34.79From 34.1 € HTFrom Excl. VAT £28.99
Dessinateur

August Macke (1887 – 1914) was a German Expressionist painter and one of the leading members of the German Expressionist group Der Blaue Reiter (The Blue Rider). He met Robert Delaunay in Paris in 1912 and Delaunay's chromatic style Orphism had a profound influence on Macke's subsequent works. Macke lived in a particularly turbelent time in Western history as well as the history of art, which was reflected in his works. His final painting, before his premature death at the beginning of the First World War at the front in Champagne, France, entitled Farewell, is an atmospheric depiction of the general mood of despair and lack of hope created by the outbreak of war.

Mother and Child in the Park
August Macke

Portrait of the artist's wife with a...
August Macke

The White Jug with Flower and Fruit
August Macke

Walkers on the Bridge
August Macke

A Glance Down an Alley
August Macke

Am Thuner See I
August Macke

At the parrots
August Macke

Characters from Tegernsee I
August Macke

Children at the Greengrocers I
August Macke

See all
artworks from
August MackeDiscover