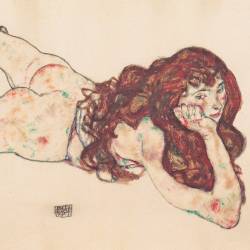 Egon Schiele (1890-1918) was an Austrain artist and a major figurative painter of the early 20th century.

Schiele studied at the Akademie de Bilden Kunst in Vienna from 1906, but was frustrated by the conservative teaching style and thus left after 3 years. In Vienna he sought out Gustav Klimt, who was known for supporting young artists. Klimt was taken by the young Schiele's talent and was very supportive of his career. Consequently Schiele's early works are highly influenced by Klimt and Art Nouveau. In 1909 Klimt invited Schiele to exhibit at the Kunstchau. Here he encountered works by artists such as Edvard Lunch, Jan Toorop and Vincent Van Gogh. Schiele's daring and erotic explorations of the human form, characterised by their intensity and the raw expressiveness of his lines led him to be considered a pioneer of early Expressionism.

Portrait of a WomanEgon Schiele

See all
artworks from
Egon SchieleDiscover