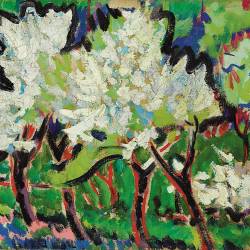 Ernst Ludwig Kirchner was born on May 6, 1880 Aschaffenburg, Bavaria, Germany. Kirchner took part in the German Expressionist Movment. He studied architecture at the Dresden Normal School, where he met Fritz Bleyl, Erich Heckel and Karl Schmidt-Rottluff, with whom he founded the group Die Brücke (The Bridge). In 1906, he executed a woodcut announcing the group’s creation. In 1911 he moved to Berlin, where he did not really fit in. There, the landscape inspired him to paint urban and night scenes. He also met Erna Schilling, a cabaret dancer, who became his model and later his wife. It was his many stays on the island of Fehmarn that gave Ernst Ludwig Kirchner the opportunity to change his surroundings and inspired many of the nudes in his work. The outbreak of the First World War marked a pause in his painting activity. He moved to Switzerland and was forced to question his art. In 1937, he was declared by the Nazi government a “degenerate artist”. The following wear, on June, 15, he committed suicide.

Bathers on the Shore, at Fehmarn
Ernst Ludwig Kirchner

Exhibition of German Graphics at the...
Ernst Ludwig Kirchner