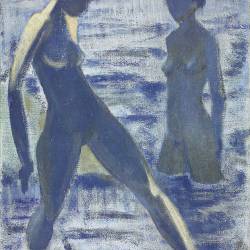 Otto Mueller was born on 16th October 1874 in Liebau, Silesia (now Poland). From 1896 he studied at the Academy of Fine Arts in Dresden. Two years later he continued his studies at the Academy of Fine Arts in Munich. He was forced to abandon his studies after the rector of the academy, Franz von Stuck, described him as an "untalented" artist. Initially interested in Impressionism and Symbolism, Mueller turned definitively towards Expressionism from 1908 onwards. During the First World War, he voluntarily joined the German army and went to fight in France and Russia. In 1919, the artist became a professor at the National Academy of Fine Arts in Breslau. At the same time, he refuses all bourgeois comforts and is welcomed by Gypsies where he lives in harmony. Otto Mueler dies in Breslau on 24th September 1930. During the Second World War, the Nazis seized almost 357 of his works, considered to be "degenerate art".

Otto Mueller was an expressionist painter of the 19th and 20th centuries. His famous works are "Bathers", "Gypsies by the Campfire" and "Mother and Child".

Gypsies by the Campfire
Otto Mueller

Trees before a Bridge
Otto Mueller

Two Little Gypsies in front of a hut
Otto Mueller