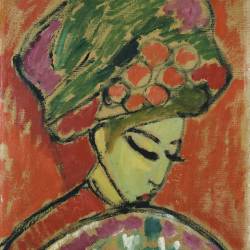 Alexej von Jawlensky was born  on March 13, 1864 in Torjok, Russia. During his childhood, he and his family lived in different cities in Russia and present-day Poland according to the assignments of his father, a colonel in the imperial army. After his father's death in 1872, Alexej von Jawlensky entered the Alexander Military School and was appointed lieutenant in 1884 in Moscow. In 1898, he was transferred to St. Petersburg and enrolled at the Imperial Academy of Fine Arts. In 1905, he was exhibited for the first time at the Salon d'Automne in the Russian section. At the beginning of the First World War, the painter took refuge in Switzerland and found himself in great isolation. He died on 15 March 1941 in Wiesbaden, Germany.

Alexej von Jawlensky was a Russian expressionist painter of the 19th and 20th centuries. His famous works are "Girl in Turban", "Head (Dark Buddha)" and "Girl with Doll".

Still Life with Jug and Sculpture on...
Alexej von Jawlensky

A House in the Mountains
Alexej von Jawlensky